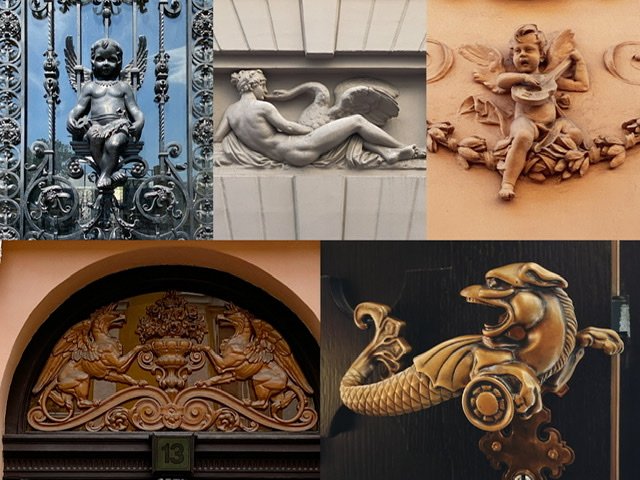 If you are lucky enough to visit Budapest, you will be treated to many architectural delights. And if you look at the buildings closely, you can discover unexpected and unique architectural ornaments.

Steve and I spent the two years of the pandemic in Budapest, so I have had a lot of time to explore the city. In this post, I share some of my favorite architectural ornaments.

The building at Régi posta utca 15 has four mythological reliefs. This one shows Leda, the Queen of Sparta, being seduced by Zeus in the form of a swan.

On the same building, you can see the gods Mercury and Bacchus, and the goddess and muse of dance and chorus, Terpsichore.

A trio of musical angels hang out on a 130-year-old building at Báthory utca 20.

I love this charming relief on the building at Dalszínház utca 9, and I want to know the story behind it.

Check out these endearing reliefs at Váci utca 66. The building originally belonged to the Serbian Orthodox Parish. The reliefs represent the four seasons and qualities such as joy and jealousy.

These are a few of the details on the Liszt Ferenc Academy of Music at Liszt Ferenc tér 8, a stunning art nouveau building. You can see more of it, inside and out, here.

As you can imagine, the Matthias Church at Szentháromság tér 2 is full of imagery. These two fellows caught our eye.

The hunting scene on one of the buildings on Szarvas tér added a little bit of color.

This relief at Vadász utca 38-40 takes you back to a more elegant time.

A walk down Fortuna ucta in the Castle District is a delightful change of pace. Here the buildings are simpler and painted in pastel colors. Visit this shepherd and his friend at Fortuna utca 25.

Here is one of the many detailed reliefs on the Shuttleworth House at
Bajcsy-Zsilinszky utca 63. You can see more of the intricate facade here.

Say hello to these two sailors when you pass by Havas utca 1-3. Even though Hungary is landlocked, the country does have a navy. Hungary’s navy is river-based on the Danube River.

I was surprised to see these decorations on the building at the corner of Tompa utca and Ferenc körút. I believe the figure on the left in the middle relief is Mercury. If you know the story behind these reliefs, please share.

How can you not love this lion on the image-rich building at Jókai utca 42?

Can you ever have too many naked babies on your buildings? These cuties delight passersby at Váci utca 16.

How is this for a fancy facade? This is the Stein Palace at Andrássy utca 1.

Ten statues circle the building at Deák Ferenc utca 16. It is currently home to Ritz Carlton Budapest, but was originally the office of the Adriatic Insurance Company. The statues circling the building represent the different types of insurance the company offered.

I call this the Centerfold Building because the reclining man on top reminds me of the famous Burt Reynolds photo in Cosmo. You can see this sexy guy at Bajcsy-Zsilinszky út 21.

What a fun and fitting statue at the entrance to the Szechenyi Baths at Állatkerti krt. 12.

Two griffins on an intricately carved door, or is it a Gryffindor? Either way, you can admire it at Gyulai Pál utca 11.

If you have to have window grates, you might as well make them unique. These are on the Ministry of Education and Culture building at Szemere utca 12.

These angels watch over an apartment building at Váci utca 6.

Detailed frescoes on the apartment building at Rákóczi utca 7 are just two of the many decorations on this neo-Gothic gem with Moorish influences.

This door handle is the only indoor item in this post. It is in the Museum of Fine Arts at Dózsa György út 41.

Don’t forget to look down to see even more marvels. These three maintenance hole covers and the floor plaque (clockwise from upper left) are at Andrássy utca 22, Kristóf tér 2, the Árkád Mall, and Deák Ferenc utca 13.

These are only of few of the delightful decorations you can find when exploring Budapest. Steve and I would love to hear what you think of them. Have you seen any of them? Do you have favorites that are not in this post? Let us know in the comments section.

And see what it cost for Steve and me to live in Hungary for one year:
Wind and Whim’s 2021 Full-Time Travel Costs: Hungary