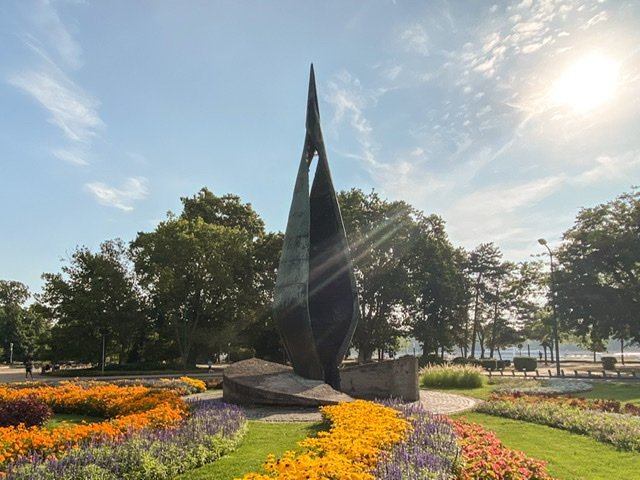 When Steve and I arrived in Budapest, our driver suggested we visit Margaret Island. The way she described it did not make us want to head right over there. This view was reinforced the first time Steve and I visited the island.

We had been walking for close to an hour when we reached the southern entrance of the island. For several minutes we walked along a crowded sidewalk, thinking, “Is this it?” We were tired, so we turned around and went home. It turns out that you need to walk for four or five minutes before you are really in the park if you enter from the southern end.

We tried another day, and I am glad we did. Who knew one little island could hold so much?

I am excited to share many of the cool things to do on Margaret Island, starting from the southern end and working up to the northern tip.

A Brief Intro to the Island

Where is Margaret Island Located?

Margaret Island sits in the Danube River between Districts II and III on the Buda side of the city and District XIII on the Pest side. The long, narrow island covers an area of less than 1 square kilometer (less than half a square mile), but there is a lot packed into that space.

You can access the island from the Margaret Bridge on the southern end or from the Árpád Bridge on the northern end. Since most people will enter it from the south, which is closer to the city center, I will list the points of interest from south to north.

Why is it called Margaret Island?

The island owes its name to Saint Margaret. She was the daughter of King Béla IV, who ruled in the 13th century. King Béla was forced off his land in Buda by the Tatars. While in exile in Dalmatia, he promised his next child to God if he could get his kingdom back.

As luck would have it, he was able to return to Buda and rebuild his kingdom. His next child was a daughter named Margaret (Margit in Hungarian). He kept his promise and sent her to live with Dominican nuns when she was three or four years old. A few years later, King Béla had a Dominican convent built on what was then called Rabbit Island so Margaret could be closer to her parents. She moved to that convent when she was nine years old and lived there until her death at twenty-eight. Here is more information about Margaret’s interesting and tragic life.

The Centenary Monument (#18 in blue)

The Centenary Monument was erected in 1972 to commemorate the 100th anniversary of the creation of Budapest by unifying the cities of Obuda, Buda, and Pest in 1873.

You can see the monument in the featured photo. This monument looks simple, but get up close and look inside. You will see reliefs of the main events in Hungarian history for those 100 years.

One small part of the inside of the Centenary Monument

Just past the Centenary Monument, you will see a large fountain. There are hourly musical shows in the warm weather. Even when there is no music, this is a popular place to relax.

Here is the website for the fountain shows. It is in Hungarian, but it is easy to understand the schedule.

As you head up the main road, you will come across the ruins of a 13th-century Franciscan church and monastery. There isn’t much left, but it is a great place for a few photos.

The front of the Franciscan monastery ruins

There are several baths in Budapest. What makes Palatinus different is that it is more of a swim park complete with slides. It is also less costly than the well-known Szechenyi or Gellert baths.

The clouds did not detract from the fun

Across the road from the Palatinus Baths is a large rose garden. It is a sight to behold when the roses are in bloom. But don’t despair; even if you visit when they aren’t in bloom, the island is full of vegetation.

Head toward the Pest side of the island and slightly left, and you will find the ruins of a 13th-century Dominican convent. Margaret spent most of her life here.

There is much more to see here than at the Franciscan monastery ruins.

Part of the convent ruins

Just a little way ahead and toward the center of the island is the water tower. It was built over 100 years ago in the Art Nouveau style. If you’re feeling ambitious, you can climb its 152 steps to the top.

A word of warning: unless you are looking for some exercise, you should skip climbing the tower. There isn’t much to see when you reach the top. You get much better views of the city from Gellért Hill and Fishermans’ Bastion.

The water tower with an open-air theater at the bottom

The island can be teeming with activity yet still be tranquil. One of the best places for tranquility is in the Margaret Island Japanese Garden. It is close to the northern end of the island.

The garden is small but holds several delights. Don’t miss the lily pond with the Little Mermaid of Budapest statue.

In the Japanese Garden

Other Things to See and Do

There is even more to see on this marvelous island. As above, the items are listed from south to north except the running track, which encircles the island.

Runners can enjoy the beauty of the island and views of the Buda and Pest shores while running around the island on a 3.2 mile (5.3 km) rubberized track. Learn more about this run here.

This is truly a mini zoo, but the animals are sure to delight the little ones.

This Romanesque church originally dated back to the 12th century and was reconstructed in 1931.

Its bell is from the 15th century and had been lost. It was found buried in 1914 when a storm knocked down a tree. Monks most likely buried it during the Turkish invasion in the 16th century.

Not to be confused with the musical fountain on the southern end. This well is a replica of the first musical well ever built.

The musical well on Margaret Island

Getting To and Around Margaret Island

It’s easy to get to the southern entrance on tram number 4 or 6. Both stop in the middle of the Margaret Bridge. You can also take bus number 26. It is the only public transportation that goes onto the island. These are just two of the many options. You can find the best route for you on Google Maps.

You can only drive onto the island from the north end, and only to go to the parking lots for the hotels, but there are several ways to explore it:

Walking – This is my favorite since the island isn’t that big.

Bikes – You can rent a bike on the island, although the hours are limited. Another option is to use MOL Bubi Budapest. This bike-share system works well. You can find bikes all over the city, and there are several places to return them on Margaret Island. You will need to register beforehand.

E-Scooters – Three companies have e-scooters available in Budapest, Lime Bike, Bird, and Tier. I have only used Lime Bike. Its app worked well, but I have sworn off e-scooters after having two accidents that were both my fault. You can read about them in “Beware the E-Scooters.”

If you want to try e-scooters, check out the various apps. There are restrictions on where you can leave them.

Fun and funky rentals – There are several vendors near the southern end of the island who rent bikes, scooters, and peddle cars. You can find them around the circle that contains the Centenary Monument.

Train – this cute train might be just the ticket if you are with young children.

The train is waiting for you at the Centenary Monument

As you can see, there is a lot of history and much to see and do on Margaret Island. There are also two hotels and a hostel on the island, as well as places to eat, playgrounds, workout stations, and public restrooms scattered about.

I hope this post has inspired you to explore Margaret Island. Or perhaps it brought back memories of a past visit. Either way, Steve and I would love to hear your impressions of Margaret Island.