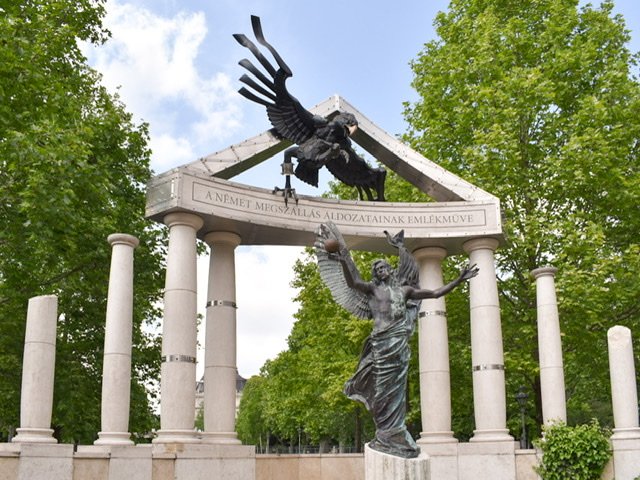 While the Nazis persecuted many groups, the largest impact was on Jews. Throughout the post, I will reference the impact on the Jews of Hungary. This is not meant to ignore or diminish the effects on other groups.

The ten memorials are organized by district. The districts  are laid out like this:

1. Memorial for Victims of the German Occupation

This beautiful but controversial statue on the southern edge of Liberty Square was erected during the night in July 2014. It shows the Archangel Gabriel (a national symbol of Hungary) being attacked by an eagle (representing Nazi Germany).

Some Hungarians feel that the statue puts all the blame of the persecution of Jews on the Germans and ignores the fact that Hungarians collaborated with the Nazis and aided in the deportation of their countryman. You can learn more about this controversy here.

In front of the statue, you can see a poignant collection of photos and artifacts that keep the memories of the  victims alive. It is an impassioned response to the Memorial to the Victims of German Occupation.

In addition to the two items above, you can see the Memorial to the Soviet Red Army in the northern part of Liberty Square. It honors the soldiers who liberated Hungary from the Nazis. Unfortunately, the Soviets went on to occupy Hungary for 45 years.

Many statues from Soviet times have been removed from their places of honor and erected in Momento Park, but the Monument to the Soviet Red Army remains in a place of honor.

2. Shoes on the Danube

This unique memorial commemorates the thousands of people killed by the Arrow Cross Party. This fascist, anti-semitic party ruled Hungary for less than six months in the fall and winter of 1944-1945.

One way the party terrorized Jews was to line up a group along the bank of the Danube River, force them to remove their shoes (because leather had value), then shoot them and let the river wash their bodies away.

The memorial was designed by artist Gyula Pauer and was unveiled in 2005. It consists of 60 pairs of iron shoes representing the men, women, and children murdered here.

In addition to this atrocity, the Arrow Cross Party deported 80,000 people to the Austrian concentration camps.

Unfortunately, hatred remains in some people’s hearts. After the unveiling ceremony, several pairs of shoes were removed with a crowbar and kicked into the river. At a later time, pig’s feet were found in the shoes.

The monument is on the Pest side of the Danube River, south of the Hungarian Parliament Building.

Raoul Wallenberg was a Swedish architect, businessman, and diplomat who served as Sweden’s special envoy in Budapest in 1944. During that time, he saved thousands of Hungarian Jews by issuing protective passports and sheltering them in buildings that were designated Swedish territory.

Wallenberg was taken into custody by the Soviets in early 1945. The circumstances of his death remain a mystery. One likely scenario was that he was executed in Lubyanka Prison in Moscow in 1947. He would have been 34 years old.

The bench is on the southeastern side of Elizabeth Square.

There is also a plaque honoring Wallenberg at the corner of Raoul Wallenberg utca and Pozsony utca in District XIII.

A visit to the House of Terror will take you chronologically through the history of two Hungarian totalitarian dictatorships of the twentieth century. It begins with the Nazi occupation of Hungary in March of 1944 and continues through the first eleven years of the 45-year long Soviet occupation.

The two main parties to know are:

The Arrow Cross Party – This far-right group was modeled after the Nazi Party of Germany. They were in power for less than six months in 1944 and 1945. During that short time, they murdered between 10,000 and 15,000 civilians and deported 80,000 Hungarians to concentration camps.

The AVH – The secret police of the People’s Republic of Hungary during the early part of the Soviet Union’s occupation of Hungary. This group was comparable to the KGB. I was shocked to learn that this group used concentration camps after WWII but could not find much information about them.

This museum is particularly impactful because it is located in the building used by the two dictatorships to detain, torture, and kill those they considered enemies of the state.

The building is on Andrássy Avenue, an elegant boulevard considered by some to be the Champs-Élysées of Budapest. Its location makes this excerpt from the Terror House website particularly haunting:

“We are not in a distant military prison, not deep down in a dungeon, but on the avenue of the civil world, just a half a metre from the pavement, from the everyday life.”

To do this museum justice, be prepared to spend at least two hours.

In Budapest and other cities in Europe, you can find plaques about 4 inches square embedded in the pavement in front of buildings. They commemorate residents of the buildings who were victims of the Nazis.

These stones uphold the Talmud’s teaching that a person is only forgotten when his or her name is forgotten.

Each plaque includes the resident’s name, date of birth, and as much information about their places and dates of deportation and death as is known.

These two stones are for a husband and wife. The husband, Jozsef, was born in 1905. He was deported in 1942, although no destination is given. He died in 1945 in the Hungarian town of Koszeg, where the Nazis had a  slave labor camp. He may have been one of the 4,500 people who died of typhus in that camp.

More detail is known about the wife, Joszefne. She was taken to the Theresienstadt Ghetto in the Czech Republic. This was a hybrid concentration camp and ghetto. According to the stone, she died in Budapest in 1946 as a consequence of her captivity.

In Hungary, it was traditional for the wife not only to take the husband’s last name but for her to also take his first name with ‘ne’ added to the end. So, in this case, the wife, given the name Magdolna at birth, became Jozsefne upon her marriage.

While there are stolpersteine in many of Budapest’s district, the greatest concentration can be seen in District VII since a part of this district was historically Jewish. Learn more from A Guide to Budapest’s Jewish Quarter by Offbeat Budapest.

There are more than 70,000 stones in over 2,000 cities and towns in Europe. Read more about the stones in this BBC article.

Each leaf of this sparkling silver tree has the name of a Hungarian Jew killed during the Holocaust. The tree is in the Raoul Wallenberg Memorial Garden of the Dohany Street Synagogue. It stands over mass graves of some of those murdered by the Nazis in 1944–45.

There are four red marble plates nearby that recognize 240 non-Jewish Hungarians who saved the lives of Jews during the Holocaust.

The tree was installed in 1991 and paid for by the American actor Tony Curtis in memory of his Hungarian-born father, Emanuel Schwartz.

The tree can be seen at Wesselényi utca 7. It is part of the Hungarian Jewish Museum and Archives.

I took the photo through a fence because we couldn’t visit the museum during the pandemic. There is much more to see in the Dohany Street Synagogue and the Jewish Museum. I will update this post once we can visit them.

I ran across this memorial by surprise while walking down Dohany utca one afternoon. As I passed an apartment building, I noticed what looked like bullet holes in the front wall. Just past the building, I saw three large pieces of rusted metal with inspirational writing in three languages (Hungarian, English, and Hebrew). It turned out to be the Ghetto Memorial Wall.

Next to the writing is a map of the Jewish Ghetto. There are holes through which you can see scenes from that time.

The memorial was installed in 2015 in recognition of the 70th anniversary of the Holocaust.

You can see this memorial at Dohány utca 34.

There are about 20 mini statues in Budapest. They are the work of a sculptor named Mihály Kolodko. The statues are small (less than 1-foot square) and set throughout the city. Their subjects range from pop culture to politics, from humor to history.

One of the statues honors a woman named Hanna Szenes. She was a Hungarian-born Jewish war hero who parachuted into Yugoslavia during World War II to assist anti-Nazi forces. Unfortunately, she was captured and executed at the tender age of 23. Throughout her imprisonment and torture, she refused to give her captors the information they sought.

The statue is at the corner of Hanna Szenes Park at Rózsa utca and Jósika utca.

Lutz housed Jews in safe houses in the city. The most famous is The Glass House, the former site of a glass import business. There is a small but well-regarded museum in this building at Vadasz utca 29. Unfortunately, we have not visited it yet because it has been closed during the pandemic.

In addition to safe houses, Lutz arranged for protective letters that allowed 8,000 Jews to emigrate to Palestine. This involved working with the Nazis, who grudgingly allowed him to offer protection to some Jews. Learn more about the amazing Carl Lutz and the use of protection letters.

There is a plaque on the wall next to the statue that reads:

This memorial is a Dob utca 12.

The Holocaust Memorial Center is a memorial to the more than half a million Hungarian Jews killed by the Nazis. Its permanent exhibit, titled “From the Deprivation of Rights to Genocide,” follows history as Jews in Hungary were first stripped of their property and human rights to the horrors of mass shootings and deportation to concentration camps.

A strikingly modern building houses the museum. In the courtyard, you can see a glass hall called the Tower of Lost Communities. The names of 1,441 settlements that lost their entire Jewish population to deportations.

At the end of the exhibit, you can see the small but beautiful Budapest Synagogue.

The museum opened in 2004 in the location of the Páva utca Synagogue. There is a lot to take in, so allow at least a few hours. Almost everything has an English translation.

Dig Deeper Into the Memorials

While researching this post, I came across the thesis Holocaust Memorials in Budapest, Hungary, 1987-2010: Through the words of the memorial artists by Jessica Taylor-Tudzin. It is a long but interesting read.

For a lighthearted look at Budapest, check out The Funky Side of Budapest and don’t miss The Beauty of Budapest in 50 Photos.

Steve and I love hearing from our readers. Please let us know if you have seen any of these memorials and what they meant to you. As always, I have done my best to be accurate, but if my facts are not correct, please let me know.