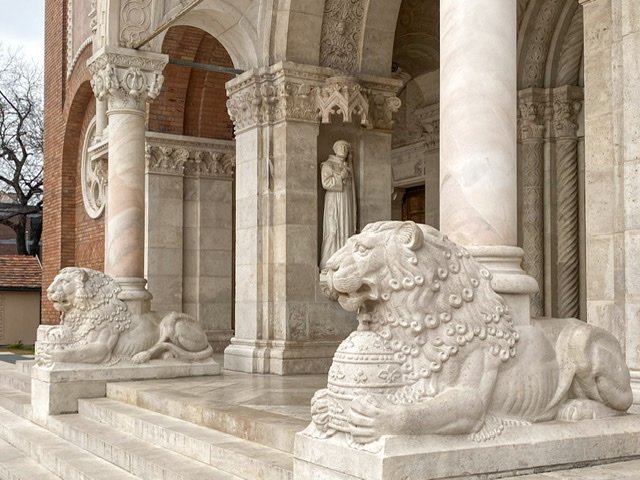 Steve and I took a five-night trip to Szeged, Hungary, in March. One of the reasons was to visit the thermal baths at Sunshine Aquapolis Szeged, which are connected to the Hunguest Hotel Forrás. We also wanted to see the Art Nouveau buildings that grace the city after it was rebuilt following a devastating flood in 1879.

Read on to learn more about the city and the best things to do in Szeged.

Table of Contents show
Szeged Facts
Szeged’s Unique History
What to Do in Szeged
1. Marvel at the Architecture
2. Visit the Votive Church
3. Tour the New Synagogue
4. Get Your Art Fix at Reök Palace
5. Stroll Through the National Pantheon
6. Stop by the Mora Ferenc Museum
Where We Stayed
What It Cost
Is Szeged Worth Visiting?
More About Hungary

Szeged has been inhabited since ancient times and was first mentioned in a royal charter from 1183. As you would expect, it saw many battles and many changes. But the event that makes this city unique could have wiped it out.

In 1879, most of the city was destroyed by a flood. Reconstruction during the end of the 19th and the beginning of the 20th centuries has led to a city of relatively modern architecture.

What to Do in Szeged

1. Marvel at the Architecture

During the decades when the city was being rebuilt after the flood, the Art Nouveau style was popular, so Szeged has many lovely buildings in this style.

Since our first full day in the city was a Monday, and many attractions were closed, we did a walking tour. Despite the cold and a few snow flurries, we managed to see quite a few stunning buildings. Here are a few highlights:

The Bridge of Sighs was modeled after the one in Venice. It connects City Hall and the House of Labor.

Detail on the facade of the Beregi Palace

The Votive Church overlooks Dóm Square. This Roman Catholic cathedral is the fourth largest in Hungary. Construction began in 1913, but because of WWI, it wasn’t completed until 1930.

Before you enter the church, you will be captivated by its beauty and abundance of decoration. The exterior is sparkling clean, which you can’t say about all the architectural gems in Szeged.

Detail on the front of the Votive Church

More details on the exterior of the church

After you finish marveling at the exterior beauty, you can have a look around the inside of the cathedral.

After that, visit the tower and exhibition. The entrance to these is in front of the Church and underground. There is a small fee for each thing you choose to do.

We climbed the tower, but frankly, the city was not lovely from up high. Perhaps because of the time of year.

We spent quite a while in the exhibition hall. It is the most spacious exhibition hall we have seen, and everything is well marked in Hungarian and English. Whether or not you are religious, if you appreciate beautiful things, this is a worthwhile exhibit.

Hands down, this was the best thing we saw in Szeged. The synagogue is breathtaking. If you visit, be sure to download the Jewish Heritage Szeged app. It is very well done.

Unlike the Votive Church, there aren’t separate activities in the synagogue. Most of the things to see are on the first floor, but there is so much beauty and so much history (thanks to the app) that a visit to the New Synagogue may end up being one of your favorite things to do in Szeged.

The interior of the New Synagogue

A trio of windows in the synagogue; you can learn about their meanings from the app

4. Get Your Art Fix at Reök Palace

Built in 1907, Reök Palace was originally an apartment building. Now it is the Regional Arts Center. The building is large, but the art center fills only part of it.

A corner view of Reök Palace

I was so excited to visit the center and see the exhibits showcased on their website, including an Art Nouveau exhibit and a Dali exhibit. Unfortunately, both of these exhibits had already closed, which was not obvious on their website.

The two exhibits we saw, Dante’s Universe and Digital Testimonials, were interesting enough, but I left disappointed. Hopefully, the art center will update its website and be clearer about the dates of exhibits.

Architectural details on the Reök Palace

5. Stroll Through the National Pantheon

Like the Votive Church, the National Pantheon is in Dóm Square. Sculptures of famous Hungarians fill three covered walkways.

One of the three sides of the Pantheon

If you are not from this part of the world (or a Hungarian history scholar), most of the names probably won’t mean much to you. The attraction here is the individuality of the memorials.

Some of the unique memorials in the Pantheon

6. Stop by the Mora Ferenc Museum

We didn’t visit this museum; the siren call of the baths was too strong.

The museum offers ethnography, natural history, and fine art exhibitions related to Szeged and the surrounding area. Be sure to check the website before you visit. As of this writing, several exhibits were closed for renovations.

We spent five nights at the Hunguest Hotel Forrás. The hotel is on the east side of the River Tisza, but just a short walk or bus ride to the center of town on the west side.

We chose it because, as regular readers know, we love the thermal baths. The hotel is next door to the Sunshine Aquapolis Szeged, which you can access through an enclosed walkway.

Overall, we enjoyed our stay, which included half board. Both breakfast and dinner were buffets, and the food was pretty good. As we’ve found throughout Hungary, the hotel staff was cordial and helpful, although it did take three requests before Steve got the correct size robe.

The silent wellness area; yes, it is as relaxing as it looks

Our costs included a massage for $50.

Our transportation costs were $90, which was high because we bought our outbound train tickets online and paid way too much.

Is Szeged Worth Visiting?

I can’t imagine Szeged topping anyone’s list of must-see cities, but if you are in the area, it can be worth a quick look.

If you’ve been to Szeged, Steve and I would love to know what you thought of it and if you discovered any treasures I haven’t included here. Just head to the comment section below.

You can read about other Hungarian cities in these posts:
Eger and Egerszalók: A Great Hungarian Getaway
September 2021 Recap: Castles, Caves, Baths and the Beatles (Lillafüred and Miskolctapolca)
20 Quick and Cool Things to See and Do in Budapest

Learn more about Budapest in these posts:
10 Must-See Holocaust Memorials in Budapest
Budapest’s Marvelous Margaret Island
Budapest’s Quirky and Colorful Lehel Market
The Beauty of Budapest in 50 Photos
The Funky Side of Budapest

And find out what it cost for Steve and me to live in Hungary for one year:
Wind and Whim’s 2021 Full-Time Travel Costs: Hungary

2 thoughts on “The Best Things To Do in Szeged, Hungary”