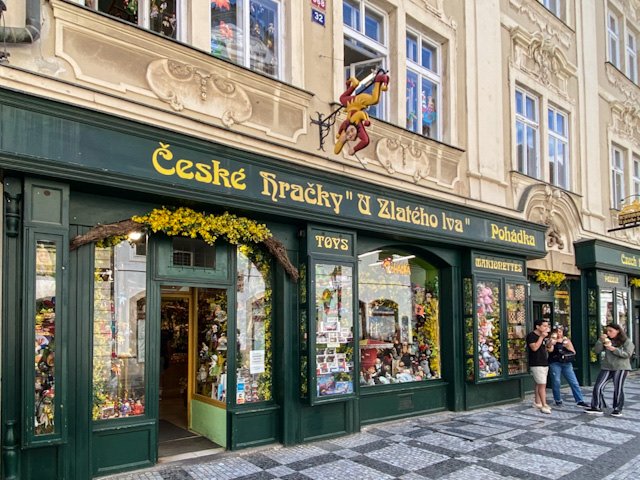 Are you planning on visiting Prague, the city of 100 spires? If so, this post is for you. Even if you are not planning to visit this beautiful Czech city, it may inspire you to add it to your bucket list.

There are two things every visitor to Prague does. One is to brave the crowds on the Charles Bridge while admiring the statues that line both sides.

The other is to spend some time checking out Prague Castle with its Gothic St. Vitus Cathedral and the preserved homes on Golden Lane.

So what should you do after you’ve seen these two staples of every Prague visitor’s itinerary? Here is a list of ten more interesting things to do in Prague.

Steve and I spent ten nights in May 2022 in Prague. For the first five nights, we stayed in District 1 at the Grand Majestic Hotel. We then moved to the Don Giovanni Hotel in District 3 because its elegant decor seduced me.

We had good stays in both hotels, but in hindsight, it would have been better to stay in District 1 the entire time. From the Grand Majestic Hotel, we could walk to most of the things we wanted to see, there were plenty of restaurants just a few minutes away, and the Palladium Mall was just around the corner.

The uniqueness of the Don Giovanni Hotel didn’t offset the time we had to spend on public transportation, and the area right around the hotel lacked supermarket and restaurant options. Lastly, the food at the Grand Majestic was better.

A note about the first three items

The Pinkas Synagogue, the Old Jewish Cemetery, and the Maisel Synagogue are part of the Jewish Museum. In addition to these three places, a ticket to the museum includes the Ceremonial Hall; the Spanish Synagogue; and the Klaus Synagogue.

Steve and I visited only three of the six sites and found all of them interesting and worthwhile.

You can purchase tickets at the Information and Reservation Center on Maisel Street 15 or at the Spanish, Pinkas, or Maisel Synagogues.

If you love learning about the history and impact of the Holocaust, check out our post, “10 Must-See Holocaust Memorials in Budapest”.

There wasn’t a lot to see in the Pinkas Synagogue, but what we saw was powerful.

The walls are inscribed with the names of 80,000 Jews from Bohemia and Moravia who perished during the Holocaust. There is also a permanent exhibit called Children’s Drawings from the Terezín Ghetto.

After you finish exploring the Pinkas Synagogue, you will enter the grounds of the Old Jewish Cemetery.

The Old Jewish Cemetery is the most chaotic-looking cemetery I have seen. The site is small and holds remains of the dead from 1439 – 1787.

Because of the lack of space, dirt was added on top of existing burial sites, and gravestones were added on the top layer to commemorate those buried in the lower layers. In some places, the graves are ten layers deep.

The original Maisel Synagogue was a Renaissance temple founded by the Mayor of the Prague Jewish Town, Mordecai Maisel. It was built in 1592 in what was then the Jewish ghetto, where it thrived for a century.

In 1689, it was severely damaged by fire and was rebuilt several times over the next two centuries.

The Neo-Gothic synagogue you see today is the result of a reconstruction that took place at the turn of the 20th century.

During World War II, the synagogue served as a warehouse for property confiscated from the synagogues and Jewish homes.

The synagogue has an extensive collection of religious and everyday items. One of the items we saw was the Golem of Prague. You can read about its significance in Jewish folklore here.

To visit the Maisel Synagogue, you must purchase a ticket for the Jewish Museum (as described above).

Now let’s move on to a more light-hearted subject, the Petrin Tower.

At 63.5 meters (208 feet), the tower is about one-fifth the size of the Eiffel Tower. You can climb the 299 stairs to the top and take in the majesty of Prague.

For a dose of Baroque beauty, stop by the Wallenstein Palace. This impressive Baroque building was built from 1624-1630 as the home of Albrecht von Wallenstein, Duke of Mecklenburg.

Wallenstein was a Bohemian military leader, statesman, and mercenary. He only lived in the Wallenstein Palace for a year before he was assassinated on the order of Ferdinand II, Holy Roman Emperor.

After World War II, the palace became state property and was turned into government offices, albeit very lovely ones. Today it houses the Senate of the Czech Republic.

Make time to see the gardens, the aviary, the dripstone wall, and the frescos in the open presentation area.

This is a small museum showcasing items related to the Soviet Secret Service. You will either love this museum, hate it, or run screaming from it.

Steve and I visited this museum and were dumbfounded by the presentation. After a short film, our guide, a Soviet native, talked about several items in the museum. He seemed particularly delighted while demonstrating the weapons, complete with ghastly sound effects, thrashing, and grotesque facial expressions.

At one point, I noticed stairs leading to a basement. Right then, I decided I was out of there if our guide suggested we go downstairs. But alas, the entire tour was on the main floor, and Steve and I were relieved to have escaped unharmed. However, we fear our entry fee may be funding a serial killer.

The price of 16 euro seemed high for the size of the museum, but I guarantee, if you dare to enter, you will be entertained.

The Gallery of Steel Figures is one of those places you come across that has nothing to do with the place you are visiting but turns out to be pretty cool.

This gallery is full of sculptures made from scrap metal. To give you an idea of how intricate these are, a car sculpture can take up to 7,000 hours to complete. There is a wide variety of subject matter, from cars to cartoon characters, from animals to famous people. There is something for everyone.

Vrtba Garden is an Italian Style Baroque garden on the slope of Petrin Hill. It is small, but it packs a large punch.

Because of its location, the garden has several levels. The stairways are punctuated with statuary, adding to the elegance.

The garden is part of the Vrtbovsky Palace, the 18th-century home of Jan Josef, Earl of Vrtba. The garden took five years to establish, from 1715-1720.

Fast forward to the 1990s. The garden was in such disrepair that entry was forbidden. Luckily for us garden lovers, it was renovated from 1993-1998.

As you enter the garden, you will pass through Sala Terrena, an entrance hall linking the palace to the garden. The walls and ceiling of the Sala Terrena are covered with frescos, and it also has a few statues.

The garden is open from April to October and has a small admission charge.

The garden is at Karmelitska 25. It can be hard to find the entrance. Look for a small archway and signs that read “Vrtbovska Zahrada.”

Click here to read a helpful guide to the garden by Delve Into Europe.

Even though it is only three kilometers (about one and a half miles) from Prague Castle, Vysehrad Castle is a world apart. Here you can stroll through a park-like setting without dodging other tourists.

This riverside fortress is believed to have been built in the 10th century. In addition to walking along the fortress walls, you can see the Basilica of St. Peter and Paul, enjoy the park with its statues, or enjoy a drink or a meal. You can also tour the underground casements that aided troop movement in the 17th and 18th centuries.

If you enjoy exploring cemeteries as much as Steve and I do, don’t miss the Vysehrad Cemetery. Many Czechs from the arts, sciences, and politics are buried here, including the composer Antonin Dvorak.

Seeing a shiny, giant rotating head may not top your list of interesting things to do in Prague, but then again, you may find Franz Kafka’s Head as entertaining as we did.

But the question has to be asked; what does this sculpture represent? Perhaps it represents the tortured soul of an artist, the complexity of Kafka’s personality, or the impermanence of life. Is it specific to Kafka, or is it a representation of everyman? Since the artist isn’t telling, it is up to each of us to decide what it means.

If you still haven’t gotten your fill of cemeteries, check out Olsany Cemetery. The cemetery was established in 1680 to provide a final resting place for victims of the plague.

Last but not least, don’t miss the Troja Chateau. Of all the memorable things Steve and I did in Prague, this was my favorite.

Even though this 17th-century chateau is outside the city center, it is well worth the trip. You can easily reach it by bus, and you will also be near the Prague Zoo and the Botanical Garden of Prague.

The chateau was built for the Sternberg family, members of the Czech aristocracy. Its Baroque design was inspired by French and Italian architecture and incorporated mythology into the building and the gardens.

The chateau has been owned by the Czech government since 1922.

The walls and ceilings in the chateau are covered with ornate frescos. There is so much to see that it is hard to know where to look first.

Leave time to explore the grounds and get some photos on the grand staircase.

We were centered in Budapest then, so our airfare to Prague was only $174.

After buying metro tickets on the first day, we learned that anyone 65 years or older rides public transportation free. If this is you, be sure you have proof of your age.

I hope that you enjoyed reading about some of the many interesting things to do in Prague as much as I enjoyed sharing them.

Of course, there are even more interesting things to do in Prague. Check them out here.

The feature photo is the Czech toy store Pohádka – Toys at the Golden Lion.