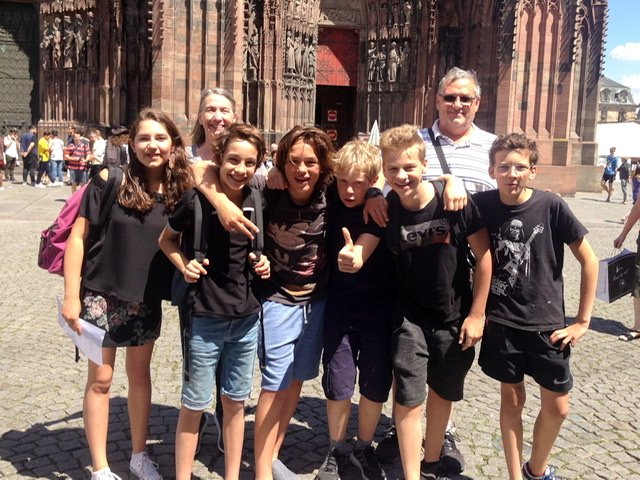 Traveling to countries where English is not the primary language has made me rethink my attitude toward multilingualism.

Before Steve and I started traveling full-time, I would be annoyed when businesses offered a Spanish option on their phone menu. I was even more annoyed when they asked me to press one for English. I felt like many Americans. Why should I have to press anything? English is our language. If people want to live here, they should speak English.

Then in 2018, Steve and I spent eight months in Europe, and much to our surprise, English was everywhere. From large cities like Barcelona and Paris to the Bulgarian towns of Plovdiv and Byala, many people, particularly those in the tourist and service industries, spoke English.

It’s a good thing because being able to communicate in the language of each country we visited would have required us to learn six different languages.

Even though English was virtually everywhere, we made sure to learn and use basic words like hello, please, and thank you.

What surprised us the most was how well many Uber drivers spoke English. I’m not talking about basics here. Many were able to hold intelligent conversations in English about politics and travel. This made me wonder how many people in the U.S. can converse intelligently in a foreign language.

So I Googled it.

According to this article from the American Academy of Arts and Sciences, 25% of Americans can speak a foreign language compared to 66% of residents of the European Union.

Standard travel advice is to learn to say “hello” and “do you speak English?” in the language of the country you are visiting. If the person replies that he does, you can switch to English.

We found this entirely unnecessary. Apparently, we look American. Quite often, clerks and waitpeople would begin speaking English to us before we even said hello. Almost every restaurant we visited either had English on the menu or a separate menu in English. These were often handed to us before we said a word.

The Tables Have Turned

2019 was our second year of travel. We spent most of it in Latin America, where English as a second language is far less common. Even in tourist areas, we often relied on Google Translate to communicate.

During that time, I learned some Spanish through Rosetta Stone. It was slow going, but it was great to be able to communicate on a very rudimentary level in the local language.

The fact that English is so prevalent in European countries makes me wonder what those of us in the U.S. are afraid of. From what I can see, being multilingual and offering services and menus in multiple languages hasn’t hurt our European friends. The more people you can communicate with, the richer your life will be.

I think if someone chooses to live in a foreign country, he should learn the language. But a little help along the way benefits those learning English. And don’t forget, not everyone who is in the U.S. and doesn’t speak English plans to stay. Some are tourists like us!

For more about our experiences with foreign languages, check out our post “Too Many Languages: Challenges of Nomad Life.”

Featured photo – Steve and me with English language students in Strasbourg, France.