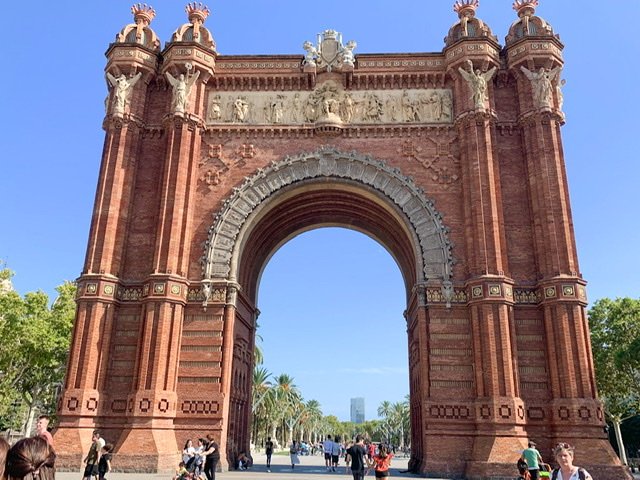 Boisterous and beautiful. That is Barcelona. This city in northeast Spain is a sight to behold and a privilege to visit. But that doesn’t mean there aren’t problems.

Here are 6 things you should know before visiting (or revisiting) Barcelona.

Antoni Gaudi (1852-1926) was a Catalan architect and a master of the Modernisme (or Catalan Art Nouveau) style of architecture. Modernisme is characterized by organic and botanical motifs, symbolism, rich ornamental details, and curves as opposed to straight lines.

Here is information on 21 sites in Barcelona where you can admire Gaudi’s talents. These are three of the most-visited Gaudi sites:

La Sagrada Familia (The Sacred Family) is Gaudi’s masterpiece and the culmination of his life’s work. It was so important to him that he chose to be buried inside it. This Roman Catholic minor basilica is the most visited sight in Barcelona.

Stepping into the basilica is a magical experience. The sunlight shining through the stained glass bathes the interior in vibrant colors.

Be warned, La Sagrada Familia will most likely spoil you for all other churches.

The exterior is as astounding as the interior. Its three facades represent three phases in the life of Jesus: nativity, passion, and glory.

Construction began in 1882. The estimated year of completion for all but some decorative elements is 2026. If that deadline is met it will have taken 144 years to build. The year 2026 marks the 100th anniversary of Gaudi’s death by being run over by a street tram at the age of 74.

La Sagrada Familia gets over 3 million visitors a year. You are unlikely to get in unless you book your visit in advance. You get a 15-minute window to enter the basilica.

Services are held in the crypt every Sunday and can accommodate about 200 people. Mass is held at the main altar only on special holidays.

Here is some information about the structure and symbolism of the basilica.

Casa Mila is another Gaudi work in the Modernisme style. This was built in the early 1900s as a home for husband and wife Pere Mila and Roser Segimon. The locals thought it was ugly and nicknamed it La Pedrera, which means the stone quarry.

The owners lived on the main floor and had apartments above that they rented out. There are people living in some of these apartments today. The building is currently also used as a cultural center, a foundation headquarters, and for commercial space.

The whole building is interesting, but the roof is a delight. This is just one of the many chimneys:

No visit to Barcelona is complete without a stop at yet another Gaudi creation, Park Guell.

This was built in the early 1900s at the behest of Count Eusebi Guell as a luxury planned community. Of the sixty houses planned only two were built. It became a public park in 1926.

The park has two parts; a Monumental Zone and a Free Zone.

The Monumental Zone covers 5% of the park. You must buy a ticket to enter and visitors are limited to 400 every half hour.

It is here you will see the iconic dragon stairway. Be sure to visit the Hypostyle Room. It is an open space featuring a multi-domed, tiled ceiling and 86 Doric columns. I missed the opportunity to get some fab photos. Please don’t make the same mistake.

In this zone you will also see gingerbread-style buildings like the one pictured below, the colorfully tiled Greek Theater (or Nature Square), and the laundry room portico.

The other 95% of the park is free to visit. It consists of many paths through lush vegetation. Warning, this is not a place for a leisurely stroll. It is hilly and very crowded and street vendors take up a good part of the walkway with their wares.

If you persist upward, you will be rewarded with spectacular views of Barcelona.

2. There are Great Non-Gaudi Things To Do Too

You can find many non-Gaudi things to entertain you as well. Stroll the beach at Barceloneta, visit the Montserrat Monastery, shop at La Boqueria, or take a day trip to Cadaques to visit the Salvador Dali House Museum.

Here are four of our favorite non-Gaudi attractions:

Our favorite place in Barcelona was the little known Labyrinth de la Horta. This 22-acre park was once a private residence. The park was established in 1791 and donated to the City of Barcelona by the Desvalls family in 1967. It opened to the public four years later.

As the name suggests it includes a labyrinth. As you stroll through the park you will be surprised by unexpected scenes. Each one is a delight.

We recommend this park if you want to get away from the hustle and bustle of Barcelona for awhile. For most of our visit we did not see another person.

A hospital wouldn’t usually be high on our sightseeing list but we’re glad we didn’t miss the Recinte Modernista de Sant Pau. The complex of 16 buildings was constructed from 1905-1930. It showcases the work of Modernisme architect Lluis Montaner.

Montaner believed in the therapeutic properties of nature, color, and form. This belief is reflected in the wealth of details both inside and outside of the buildings, and in the gardens.

Sitges is a beach town on the Mediterranean Sea 26 miles (42 km) southwest of Barcelona. We first visited it on a tour with included a stop in Tarragona (below). Even though we were there on a drizzly day we found Sitges to be captivating.

Sitges will beguile you with stately mansions along the promenade, as well as twisty side streets and quaint shops. It also has a sassy side as seen in some of these photos. It has just under 30,000 residents, but in the summer the number of people is close to 100,000.

We were charmed enough to visit it again on our own.

Tarragona is 51 miles (82 km) southwest of Barcelona. It is known for its well-preserved Roman ruins.

3. They Have Cava and Cava Sangria

Cava is the Spanish equivalent of Champagne. Almost all of it is produced in the Catalonian region of Spain.

Cava can be used to make cava sangria. It is especially enjoyable while overlooking the Mediterranean Sea on a sunny day. Be sure to give it a try when you visit the area and let me know what you think.

I tried to make it when we returned to Florida, but it just wasn’t the same. I guess I’ll have to return to Catalonia.

There are simply too many people in Barcelona. One reason is that it is very densely populated. Only 1.6 million people live in the city. However, the population density is 16,000 people per sq. km. (compare this to New York City’s density of 10,700 people per sq. km).

A second reason is that over 30 million people visited Barcelona in 2017. Of these more than 2/3 were day-trippers including cruise passengers visiting the city as one of their ports of call.

Cruise passengers come into the city by the thousands yet usually only visit for the day. They tend to go to the most popular sights like the Gaudi attractions listed above.

In an effort to control tourism the city passed a law in 2017 that forbids the building of new hotels even if they are replacing existing ones. You can read more about that here.

Barcelona continues to struggle with solutions to its overtourism problem as detailed in the July 12, 2019 Forbes article.

Because Barcelona is so crowded it is also very noisy. The noise is due to the large amount of traffic. Many people ride motorcycles which adds significantly to the road noise. It is not unusual to see people slowly ride their motorcycles onto the sidewalks.

Even with our windows closed we never got a break from the traffic noise.

6. Pickpocketing is a Persistent Problem

When you repeatedly hear that you are in the pickpocket capital of the world, take it seriously.

A quick Google search of several websites show Barcelona is the city in which you are most likely to be pickpocketed, followed by Rome.

While these petty thefts can happen anywhere, the Metro and any crowded tourist attraction or area (think La Sagrada Familia and Las Ramblas), are especially worrisome.

It is not uncommon to see people walking with their backpacks on their chests to keep them safe. Simply put, you can’t be too careful or too paranoid about pickpockets in Barcelona.

You can read all about our pickpocketing experience in our post “Pickpocketed in Barcelona.”

Our Personal Take on Barcelona

In two years of travel one thing has been constant. That is the warmth and kindness we have been met with. The one exception was in Barcelona.

For example, we visited a nearby supermarket nearly every day and used our basic Spanish, but never got a smile out of the cashiers. We did not take this personally. As we watched the crowds from our balcony we did not see many smiles.

We enjoyed learning the history behind the famous sights and taking in the beautiful architecture and street art but we didn’t love Barcelona. Were our expectations too high? Were there too many unfriendly people? Did listening to the constant street noise get old really fast? Probably a little of all these things.

We feel fortunate to have experienced Barcelona. In light of the city’s serious issues with overtourism, we will probably not return soon. If we do, it would be to visit nearby towns combined with a shorter stay in Barcelona. And definitely a return trip to Labyrinth de la Horta.

You can find out what we spent during our first 8 months as full-time travelers in “Wind and Whim’s 2018 Full-Time Travel Costs: Europe.”

Featured image of the Arc de Triomf by Leo Korman on Unsplash.com